There's no way I can talk about Fire without giving away Graceling spoilers. So I'm borrowing from the blog of the author herself, and dropping in a picture - in this case, one of Walden Pond.

(Which Mr. Thoreau probably would not be too impressed with if he were to drop by today. It's not even a good place to walk deliberately. The path around the pond is about two feet wide, with rusty fencing on either side, so you have to do a bit of squeezing and jockeying whenever you come across another walker.) 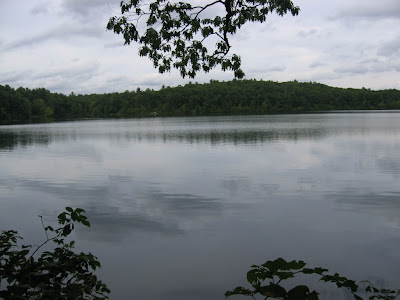 Are all the no-spoilers people gone? Good.

The actual overlap between the two books is pretty minor - the boy Leck is introduced at the beginning, and he plays a minor role in the plot. We never get to learn why Leck is such a terrible person - and maybe it's one of those things that just is - but we get to see that it's been part of his character from the start.

Fire takes place in the Dells, adjacent to the kingdoms introduced in Graceling. There are no Graces here, but there is one person with superhuman abilities.

If it's hard to imagine a woman more prickly than Katsa, well, meet Fire. She's a human monster, which means she's just that much more captivating than a normal human - whether she wants to be or not - and has the ability to sense and influence minds.

Fire is the only remaining human monster, thanks to her father's death - at which everyone in the Dells heaved a (brief) sigh of relief. She has no interest in mixing with the rest of the world, and spends her days in the company of her friend-with-benefits Archer and his father Brocker.

But the Dells are in the midst of a civil war, and Fire comes to the attention of King Nash and his brother Prince Brigan, commander of the army - and a thoroughly delectable blend of Mr. Darcy, Mr. Rochester, and Sirius Black.

Like Graceling, Fire is about power - different kinds, different uses, and different masters. If Fire and Katsa ever meet (will this be part of Bitterblue? Please?) they may not become friends, but they'll have a lot to share.

Fire is also very much about sex - as a source of power, a way of exerting power, and an emotionally-charged form of human interaction - no matter how much Fire tries to ignore the emotional aspect**.

When I say that sex is a big part of this book, I don't mean in a graphic sense. It's all offstage, but the repercussions - unequal division of love, illegitimate children, what it means to reproduce - are plot drivers, leaving you with just as many questions as answers.

*Dial, not Harcourt, thanks to an editorial relocation.

**Credit for this line of thinking goes to Mitali Perkins, who raised her own questions about Katsa and Po's relationship, which shaped how I read Fire.
Posted by Sarah Rettger at 3:08 PM

I need to read Graceling. It's been on my must-buy list for a while now. Thanks for lighting the fire under my butt!

I was tempted so say something about "before you get scorched," but decided that was taking the fire-under-butt metaphor a little too far.

Oh! I am so jealous! Can't wait to read this.

Vivian, I'd promised my copy to Mitali Perkins, but if I get another one I'll send it your way!

Looking forward to reading Fire. I just read Graceling last week, and OMG it was as good, maybe better then anyone said it would be. Actually read Whitehead's Sag Harbor right after Graceling. That's a very nice back to back.

Doret, I'm so glad you've discovered Kristin Cashore! I have to admit I've never read anything by Colson Whitehead, but I keep hearing such great stuff about him. One of these days...

KB - yes, absolutely. Not much more I can say to that!