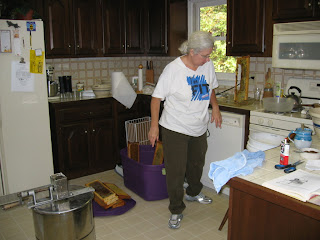 Sunday was harvest day - or extraction day, to use the technical term. (Also "robbing the bees day", the term I prefer.)

The actual robbery happened in August, when Mom removed the honey supers from her hives. I'm still not an expert on beehive architecture, but I'll do my best - supers are extra levels added to the hive where bees deposit comb and honey after they've filled the main part of the hive - so removing those frames left the hive with enough honey to get it through the winter. (The females, anyway.)

We had about two dozen frames to work with. The process is pretty simple, in theory. Using a 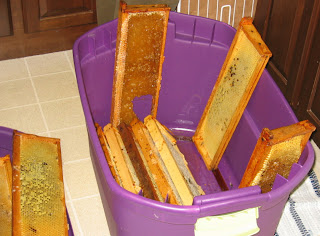 hot knife, you slice off the top of the honeycomb (vocabulary word: uncapping). After you've uncapped both sides of a frame, you drop it into the extractor, and then do the same for a second frame. Then, assuming you haven't acquired an electric extractor, you turn the crank, spinning the honey out of the comb. After a few minutes, you flip the frames and crank some more, spinning the honey out of both sides of the frame. 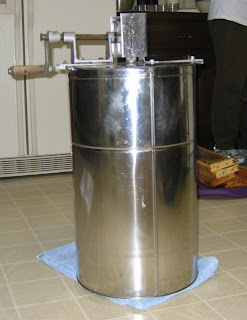 But theory overlooks a few things. Among them:
1) Determined wax moths will find their way into a securely closed plastic box.
2) An extractor that's been used for many years, and by many classes at New Pond Farm, will not be perfectly round. Not surprisingly, this makes the spinning part difficult.
3) When the door is open because it's a surprisingly warm October day, it won't take long for winged visitors to show up.

Until you leave the kitchen and come back, you don't realize just how strong the smell of honey is. But the local wasps and yellow jackets (exact species unknown, but they definitely weren't bees) had no trouble following the scent. We had a small horde buzzing at the screen door for most of the time we were extracting, hoping to play Ali Baba to our forty 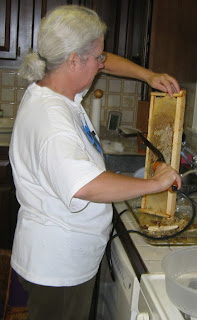 For the most part, the unwanted guests stayed outside, despite Cassie's inability to stay on one side of the door for more than a few minutes. She, of course, didn't understand why we didn't just leave the screen open. 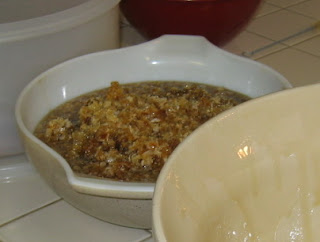 From the start, the extractor was not cooperative. Even after a round of oil was applied to the handle, it was a two-person job. Dad did most of the cranking, while I held the lids on and kept the thing from sliding across the floor. And then we stopped and poured in some more oil, and started again.

It was a slow process at first, but there was honey!

Honey is heavy. It sounds obvious, but you don't realize what that means until you pick up a frame after extracting the honey and feel how light it is, compared to five minutes earlier. Or when you look at a bucket with a few inches of honey in the bottom, and then find out it weighs more than twenty pounds. 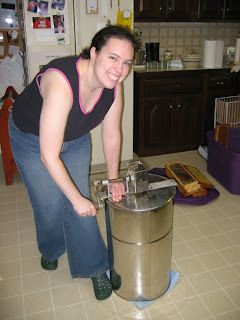 Most of the honey we got came from the frames that had been stored in the first box. We took a quick break for lunch before opening the second box - which meant that all the oil we'd poured into the hand crank finally had a chance to do its work. For the second round of frames, extracting became a one-person job.

Which allowed Mom to devote her attention to yelling at the moths that had moved into the second box. They had made their presence known, so a lot of the comb had to be discarded. But there was some honey, substantially darker than what we extracted from the first frames. (Completely due to the flowers the bees had been visiting. Next time you visit a farmer's market, compare a few jars - the difference between clover honey a 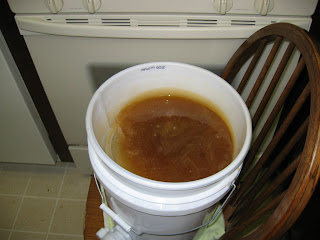 After the honey came out of the extractor, it had to be strained. Spinning frames of honeycomb does have the tendency to fling off little pieces of the comb along with the honey, and although beeswax makes lovely candles, it's not really for eating. In the picture to the right, freshly extracted honey is draining through a sieve. There were actually two, so that the finer mesh could catch wax that had made it through the first strainer.

The honey is now well-sealed, ready to be distributed in gift jars and mixed into a growing variety of recipes. The kitchen is back to normal - something I take no credit for. Mom very patiently scraped wax and drips of honey off counters, utensils, pans, and other parts of the room until she left to enjoy her belated birthday dinner.
Posted by Sarah Rettger at 7:53 PM 1 comment:

Email ThisBlogThis!Share to TwitterShare to FacebookShare to Pinterest
Labels: beekeeping

Ooh, I had one of my moments of brilliance Thursday night.

For context, this also happened to be a night of torrential rain, because the clouds decided that after ignoring us for more than a month, they were really going to let us have it. So I was pretty well soaked when I got to the library.

I was there to sell books at an event I'd been trying to avoid - the author of What You Don't Know Can Keep You Out of College was speaking to the over-stressed parents of the college-bound. Not exactly my idea of fun. But Eliza, who had volunteered for the event, has never actually done one before, or closed out the store, so Ellen asked me to keep her company.

This is by way of saying that I really didn't know much about the book beforehand - I didn't even have the title until I got there and saw the books. All I knew was that it had to do with college admissions.

I got to the library before Eliza and Darwin showed up with the important stuff, like books and money and charge slips, and sat down with Natalie Angier's Woman: An Intimate Geography, which has been on my TBR list for ages. I got a few pages into it, and then I was joined by a man who wanted to chat while he hung out by the program room.

We had a nice talk about the bookstore, and he took down Angier's name for his wife, since he thought she'd enjoy the book. (Fabulous book, by the way. Not so much for new information as for new ways of thinking about sociobiology.) And then, assuming he had come to listen to the talk, I asked if he had someone heading off to college.

I didn't do very well on coming up with excuses. Luckily, he didn't seem to mind.
Posted by Sarah Rettger at 7:56 PM No comments:

The Highest Tide, by Jim Lynch
Little House in the Big Woods, by Laura Ingalls Wilder

Crystal the Snow Fairy, by Daisy Meadows
Weslandia, by Paul Fleischman, illustrated by Kevin Hawkes
Posted by Sarah Rettger at 7:50 PM No comments: