Taking a page from YAnnabe and others, some favorite overlooked YA. Follow the link to see other bloggers' far more detailed lists.

Email ThisBlogThis!Share to TwitterShare to FacebookShare to Pinterest
Labels: lists

Going to be pondering this one for a while

Like most independent booksellers, I've got my complaints about Amazon.com. But their Amazon Encores program is doing at least one thing right - bringing new attention to Zetta Elliott's A Wish After Midnight.

I know I'm late to the party on this one, but wow.

Short version: You'd think Gemma had enough to deal with in contemporary Brooklyn, but no, she timeslips back to 1863, when Brooklyn was its own city and the Civil War was well underway. And then she's stuck for a while. See all the other reviews I linked to for a more comprehensive plot summary; I'm more in the mood to talk about specifics.

Source: ARC shared by Doret, who probably got it from Amazon somewhere along the line. Review copy, in other words. And I'm happy to share it with someone else. Leave a comment if you want to be next!
Posted by Sarah Rettger at 3:55 PM 7 comments:

There are no choreographed fights in the eighth Trixie Belden book, The Black Jacket Mystery (1961), but the threat of gangs in this book does have a rather stage-drama feel to it.

First, an aside: This may be in the front matter of the other Trixie reissues, but this is the first time I've noticed it.

This is a reissue edition of a book that was originally published in 1961. While some of the words have been changed to regularize spelling within the book and between books in the series, the text has not been updated to reflect current attitudes and beliefs.

True that. It's part of their charm, but shouldn't go unnoticed.

The meat of this story is Regan's nephew Dan Mangan, brought up from New York thanks to a judge whose first instinct is not to lock up juvenile offenders (maybe the current overseers of New York's system should be reading this, after all), but let's take a detour first, to some of the fun bits.

Have I mentioned that Mart is adorable? Have I not convinced you yet? Read on:

Lately he had grown a couple of inches taller than Trixie and was extremely proud of it, except that he was growing out of his clothing.

No one said growing up was easy, Mart. But those extra couple inches make the whole almost-twin thing easier to deal with, I'm sure. But not when Trixie's finally got a comeback for you:

But this time, Trixie didn't merely sniff at her teasing brother as usual. Instead, the glare faded into a cool stare as she said very deliberately, "The use of too many polysyllabic words is definitely a symptom of immaturity." Brian had spent half an hour at lunchtime drilling her in that answer in preparation for just such a moment. She wasn't entirely sure what all the words meant, but Brian had assured her it would stop Mart in his tracks if she didn't bungle it.

I love the idea of Trixie practicing this line over and over.

And then there are the bits that remind us how far we've come - or perhaps not. How many executive wives have to deal with this today? Her father's business connections made it necessary for her mother to be very social. And lots of times they had to rush off to Washington or some other place at a moment's notice.

Okay, on to Dan. The surburbanites are suspicious of him from the start.

A moment later, a boy who looked about Mart's age came up the step. He had a thin, dark face, and was wearing a peaked black cap with a patent-leather band, and a broad-shouldered black leather jacket with the collar turned up. His black eyes peered out from under the shiny visor of the cap and swept the length of the bus, almost as if he expected to see some danger there.

Trixie - who, may I point out, wears a jacket with her own club's name on the back - dislikes him straight off.

"That black leather jacket! Ugh! I expected to see some crazy club name on the back of it when he sat down!"

"That's strange." Honey looked started. "I did, too!" Then she giggled. "I guess we've seen too many movies."

Just in case that doesn't turn your thoughts to Blackboard Jungle, Diana Lynch draws from her vast experience to analyze the newcomer.

Di's eyes were wide. "I saw a movie about a street gang that wore black leather jackets. They were awful. Always fighting. Do you think he's like that?"

The Bob-Whites have had little interaction with Dan as they leap to conclusions, but he's not doing much to forward his own cause.

"Nobody tells us what to do around our neighborhood. We take care of that!... Switch blades? Not us! The cops get tough when they find 'em on you. We don't need stuff like that." 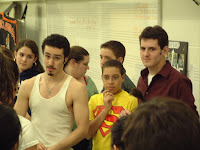 But, as it turns out, Dan - who was indeed a gang member, so I suppose I can't mock Trixie's assumptions too much - is finally ready to reform. But that doesn't mean the apparel-based prejudices are gone.

"We can't have him seen around in that black leather jacket, once he joins the B.W.G.'s," he said soberly.

"Yes!" Trixie nodded. "It was the black leather jacket that set me against him from the first, and lots of other people may feel the same way, because so many tough characters wear them."

Welcome to the club, Dan.

(Post pics are from my brother's high school production of West Side Story. In this case, the suburban kids were playing the gangsters.)
Posted by Sarah Rettger at 9:32 AM 7 comments:

Since Melissa (and let me tell you, it's very odd to refer to her as anything other than @PermanentPaper) points out that a book can count in multiple categories, I get to make this list look more impressive than it actually is:

The Vermeer you (probably) don't know 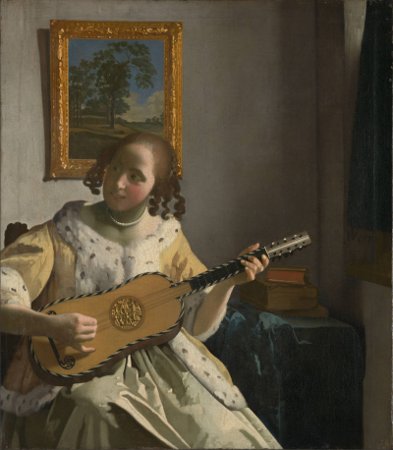 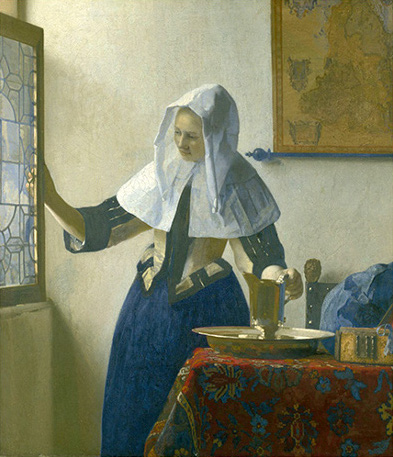 The entire known work of Johannes Vermeer fits on one not-too-long screen on the front page of the website that catalogs his work. Experts generally agree that 34 paintings are his, and there are a couple more possibilities.

Which makes Bob Raczka's in-depth look at seven of them in The Vermeer Interviews a pretty thorough introduction. If you're not familiar with anything beyond the uber-famous Girl With a Pearl Earring, add this book 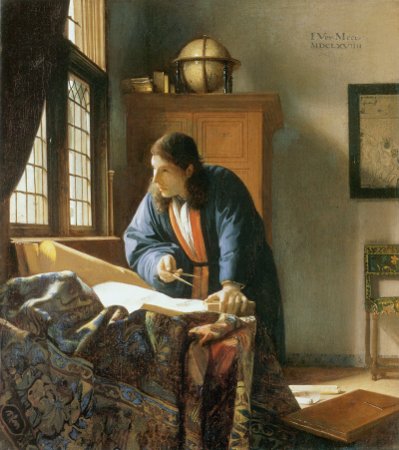 Raczka doesn't talk about the paintings as much as he talks to them, and to their subjects. The book is organized as a series of interviews with the milkmaid, the music student, the geographer, and their compatriots. 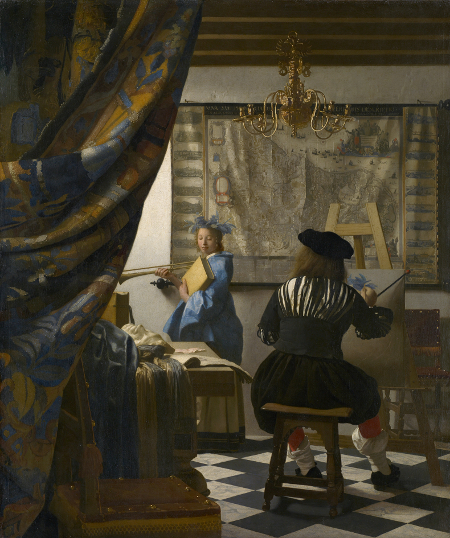 The interviews bring out technical details about the paintings - the use of light and dark, the possibility that Vermeer used a camera obscura, the fact that scholars have 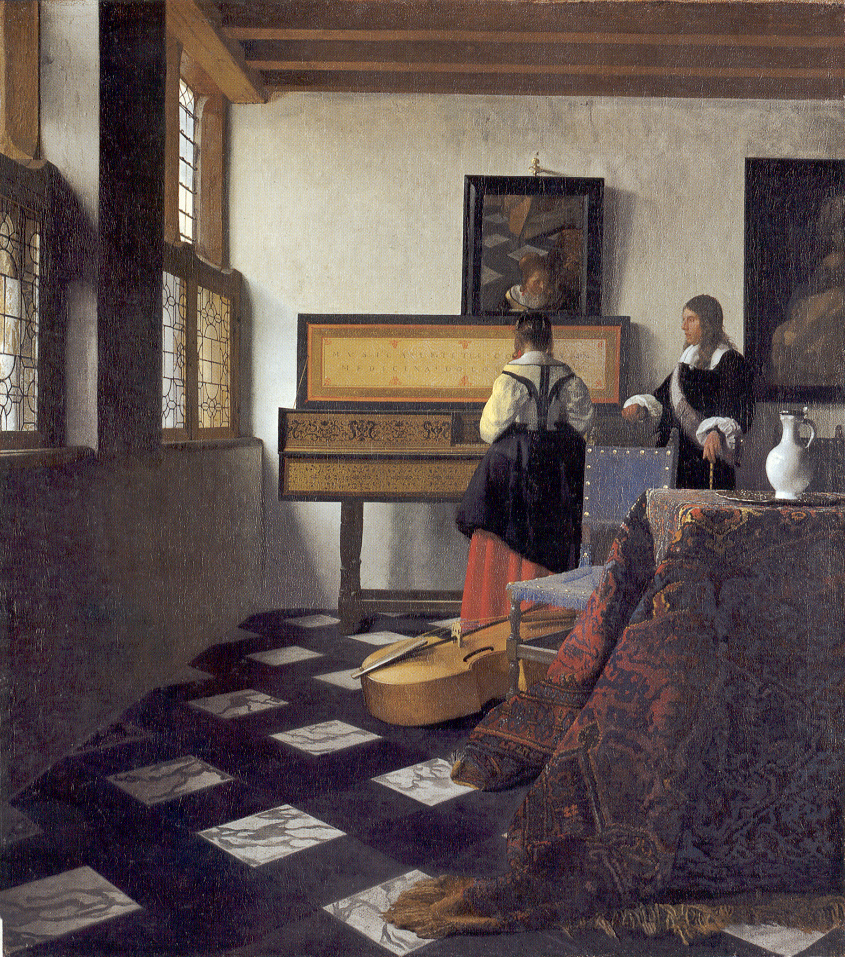 identified the map and globe featured in The Geographer - and speculate on what, precisely, is depicted. (Is Anton van Leewenhoek the model for some of the paintings? Does finding that possibility intriguing mark me as a nerd once again?)

(YA tie-in: The Concert, a Vermeer painting not included in the book, was one of the works taken in the 1990 Gardner heist. So if you're looking for a non-fiction book to pick up after Heist Society has stoked your interest in the history of art theft, try this one.) 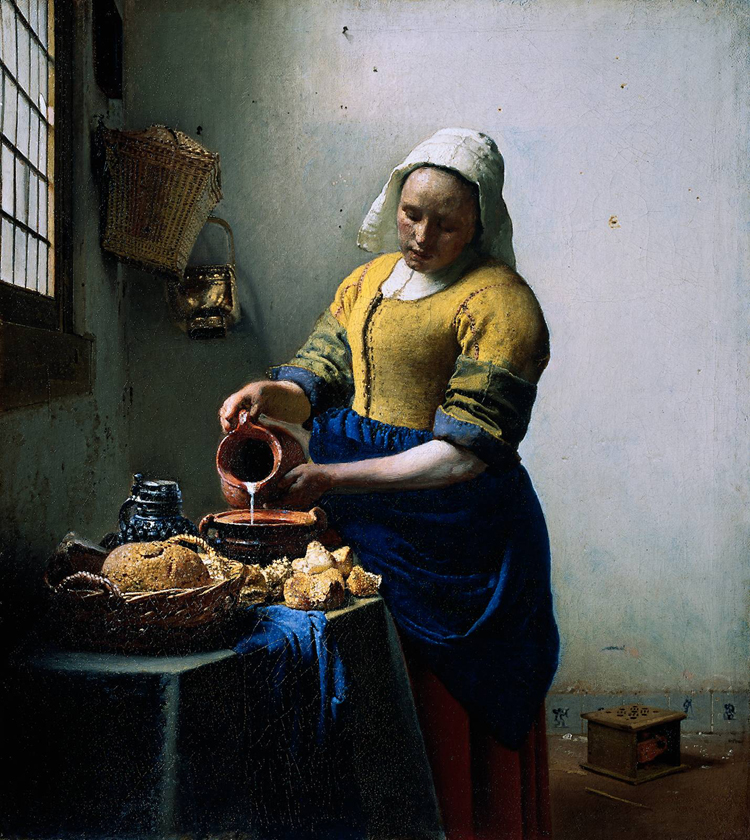 The Vermeer Interviews was a Cybils MG/YA non-fiction nominee. The review copy was provided by the publisher. 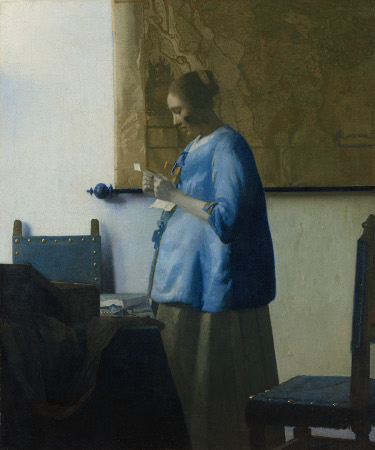 Alas, neither Candlewick nor Walker Books, which published the UK edition of The Time Book, has made any images of the interior pages available, so you're going to have to be satisfied with the cover as a sample of Richard Holland's artwork. (Click the image to see the really high-res version.)

The illustrations, you see, are what make this book work. They're described in the front matter as "mixed media," and in this case it appears to mean Victorian-style collage with a sense of humor.

The text isn't too shabby either (although it has no references whatsoever - no bibliography, no further reading, and definitely no citations). This isn't A Brief History of Time Young Readers' Edition, it's an overview of timekeeping systems in different cultures - and species - and the difficulties of making it fit into any sort of orderly calendar.

And if you finish reading this and find you want a floral clock of your own - well, blame Martin Jenkins and Richard Holland - and Carolus Linnaeus - not me.

The Time Book was a Cybils nominee for MG/YA non-fiction. Review copy provided by publisher.
Posted by Sarah Rettger at 9:43 PM 8 comments:

Do I really think I need a reading challenge?

Apparently, because I've just signed up for the 10-10-10 Challenge organized by Twitter-buds Kalen and Melissa.

So by October 10, the goal is to read 10 books from each of these categories:

Let's see if I can do better than the last challenge I signed up for.
Posted by Sarah Rettger at 2:31 PM 2 comments: