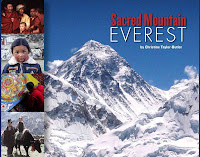 This is a long-overdue Cybils review, but let's start with the important question: how did I not know that Edmund Hillary was a beekeeper until I read this book?

Sacred Mountain Everest is a very cool book, covering some of the familiar history while giving full credit to the Sherpas who made the climbs alongside the famous names.

Seeing the author tweet this, six months after I read the book? Also very cool:

Posted by Sarah Rettger at 8:10 PM No comments:

As of this week. Clearly I've got some work to do.

1. Shakespeare-related (2/10)
Shakespeare: The World As a Stage, Bill Bryson
Contested Will: Who Wrote Shakespeare?, James Shapiro

5. Children's non-fiction (3/10)
Honeybees: Letters From the Hive, Stephen Buchmann
The Boys' War, Jim Murphy
How Do You Go to the Bathroom in Space?, William Pogue

8. Mystery (5/10)
Poirot Investigates, Agatha Christie
The Seven Dials Mystery, Agatha Christie
The Mapping of Love and Death, Jacqueline Winspear
The Weed That Strings the Hangman's Bag, Alan Bradley
A River in the Sky, Elizabeth Peters
The God of the Hive, Laurie R. King

Email ThisBlogThis!Share to TwitterShare to FacebookShare to Pinterest
Labels: 10-10-10 challenge

You though I forgot about Jane, didn't you?

Forgot, no. Lazy? I plead the fifth.

We've reached the fourth chapter of Miss Eyre's autobiography, in which the Black Pillar is introduced. That would be Mr. Brocklehurst, of course, and if this were Rocky Horror, now would be the time to throw stuff at the screen -

Mrs. Reed has summoned Mr. Brocklehurst to Gateshead because she's decided she must get the Eyre child away from her little darlings. ("They are not fit to associate with me," our girl snaps one day.) Jane spends two and a half months in a sort of limbo - deliberate religious reference, courtesy of the pretty sharp satire in this chapter - before the villain appears.

(And as Bronte sets the stage for his appearance, she breaks into a delightfully snarky portrait of Eliza Reed:

"She had a turn for traffic, and a marked propensity for saving; shown not only in the vending of eggs and chickens, but also in driving hard bargains with the gardener about flower-roots, seeds, and slips of plants...Eliza would have sold the hair off her head if she could have made a handsome profit thereby. As to her money...Eliza, fearful of one day losing her valued treasure, consented to intrust it to her mother, at a usurious rate of interest—fifty or sixty per cent.; which interest she exacted every quarter, keeping her accounts in a little book with anxious accuracy."

Just in case you thought she was meant to be a sympathetic character.)

Okay, back to the Big Bad Wolf.

You laugh? Look at how he's described, and tell me that "Grandmother, what big teeth you have" doesn't complete the series:

"What a face he had, now that it was almost on a level with mine! what a great nose! and what a mouth! and what large prominent teeth!"

And he, charming man, proceeds to quiz Jane on why she's such a wicked girl, and what happens to disobedient children, and other cheerful topics, making reference to the "Child's Guide" and its tales of awful things that happen to bad children. The "Child's Guide" was a play on the "Children's Friend," a periodical published by the real-life inspiration for Mr. Brocklehurst.

Bronte gets in one more dig at the distinguished clergyman before the scene closes: "Consistency, madam, is the first of Christian duties," he says. Uh huh. Matthew 22:38 says something a little different, and Bronte's readers were no doubt familiar with that verse.
Posted by Sarah Rettger at 7:31 PM No comments: