Trixie and all the supporting characters

It's summertime in Sleepyside, and the Trixie Belden series really gets underway with book number three.

Summer's a good time for Trixie.

The girls were wearing shorts and tops so that they could take a dip in the lake whenever they wanted to, without bothering to change into swimsuits.

One diamond, actually, found by Trixie and Honey (of course) in the floor of the cottage at the edge of the Manor House grounds.

Honey, having learned how to tell real gems from paste (what else would a millionaire's daughter do?), is ready to hand the diamond over to the police immediately. But the ever-persuasive Trixie has other plans.

"Oh, no, please," Trixie begged. "Let's not tell anybody about it for a little while. Let's try to solve the mystery of how it got in the cottage ourselves."

And why doesn't Trixie want the police involved?

"The cottage would be positively crawling with detectives who'd find all the clues before we had a chance."

Because this is when Trixie discovers her true calling: she's going to be a detective. And Honey too, just as soon as they get through with pesky things like chores and school and older brothers who like to make fun of them.

Yes, brothers. Aside from the detective thing, Brian and Mart Belden's first appearance is what makes The Gatehouse Mystery the first real book in the series. (There's also the fact that I had this one long before I acquired the first two, but I'm sticking with my thesis.)

"The one on the left with the funny-looking crew cut is Mart. The other odd-looking creature is Brian. I hate them both at the moment."

Trixie hates her brothers (at the moment) for the same reason I love them: they provide some much-needed perspective and tranquility, and aren't given to making assumptions like "The reason why the crooks didn't come back for it when they found out it wasn't with all the rest of the loot is that they got killed off in a gang war or something."

You love them too, don't you?

By the way, the Wheelers are rich. Just in case you'd forgotten.

In book #3, that means Honey gets stuck with lines like this:

"Regan's been complaining that, what with having to drive servants back and forth and having such trouble with car repairs, we need a chauffeur. I really think I'm going to have to speak to Daddy about it."

"Don't feel so bad. Daddy has plenty of money. He can keep us out of jail... If the police come around asking for diamonds, Mother will give them one of hers."

Oh, and we're treated to a description of casual dining a la Wheeler:

But on Thursdays, the cook's night off, the meal was a much more simple affair. Celia served the first course, and then she and Miss Trask brought in platters of cold cuts and big bowls of salad. Everyone helped himself, and the dessert was usually fruit and crackers with several kinds of cheese. Grown-ups were served coffee in fragile little cups.

(Is it just me, or does anyone else think Maureen O'Hara would be just right as Mrs. Wheeler?)

A few other miscellaneous bits of interest:

It's been a long time since my last Trixie post - nearly a year.

Conveniently, our intrepid sleuth pretty much covers everything you need to know on the first page of the second book in the series, The Red Trailer Mystery.

"We're going on a trailer trip, Honey Wheeler and I, with her governess, Miss Trask, to try and find Jim Frayne, who has run away again."

What? You want more?

"Oh, Dad, Jim is really the most wonderful boy I ever knew. His ambition in life is to own and run a camp for orphan boys so they can learn how to be good at sports and how to get along in the woods at the same time that they have school lessons. So that's why we feel sure he's trying now to get a job at one of those three big camps upstate. He could be a junior counselor, like Brian and Mart, or junior athletic instructor, because he's very good at everything and he knows all about the woods and did two years of high school in one and one a scholarship to college --"

That's right, Trix. Time for a breath. (Come on, aren't you a little in love with him too by now?) 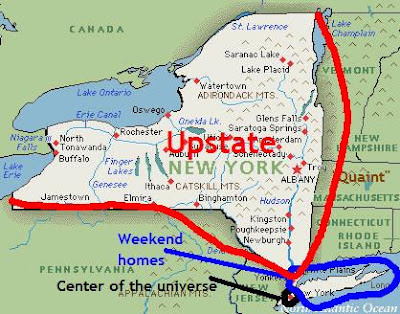 So Honey, Trixie, and Miss Trask are headed for the nebulous region known as "upstate" to those of us who live near the coast.

And how are they getting there? In a trailer, featuring a "combination living room and bedroom with a cozy little dining alcove... tiled kitchenette... glistening modern bathroom [e]quipped with a glassed-in shower, fluorescent lighting, and a compact mirrored cabinet over the washbasin."

You think that sounds like fun? Try it for a few days. Rainy ones. When one of the members of your party is a toddler suffering from severe poison ivy. And the thing leaks.

Sorry, forgot whose story we were focusing on here. Back to Trixie, who runs into another mystery, in the form of the trailer they park next to on their first night:

"That's funny," Trixie wondered aloud. "What's a man who looks so poverty-stricken doing in such a lavish trailer?"

Naturally, we find out by the end of the book. And all his problems get solved too.

In the meantime, we get to see familiar themes resurface:

"It must be an awful nuisance being rich... Your parents are always worrying for fear you'll be kidnapped and held for ransom, aren't they?"

"Why, he could go to a hotel, couldn't he?" Honey demanded.

Trixie shook her head. "Not without arousing suspicion. Boys his age don't go around stopping at hotels."

"I never thought about that," Honey said slowly.

"It was all your fault. You weren't watching where you were going. You'll have to pay for the damage, you stupid little fool!"

"'You'd better watch who you call a numbskull around here,' Jeff said evenly. 'And in case you're interested, I'm getting fed up with you giving all the orders. This is a fifty-fifty racket, see?'"

"'Reach for the ceiling, brother... Put your dainty wrists in these bracelets, bud. Pretty, aren't they?... Since we caught these two birds red-handed, we won't need to call you as witnesses."

(This, by the way, marks the first appearance of "dainty wrists" and "bracelets" as a synonym for handcuffs. It will not be the last.)

And of course the book is full of delightful signs of 1950 - airmail letters and telegrams, camps full of husky, energetic boys, a camp called Autoville...

It's not really spoiling anything to say that the book has a happy ending.

Forget spoilers. The book is almost sixty years old, and if you haven't gotten to it yet, it's not my fault.

And anyway, the last page provides us with one more swoon-worthy Jim moment, so naturally I'll close with it here.

"'They're waiting for you at a table inside.' Jim gave her a little push. 'In you go, kid. I'm top man around here now.'"

What? I'm the only one who finds that adorable? Hmph. Just wait for book #3, where Jim gets to confront his first hardened criminal.
Posted by Sarah Rettger at 8:30 PM 4 comments: 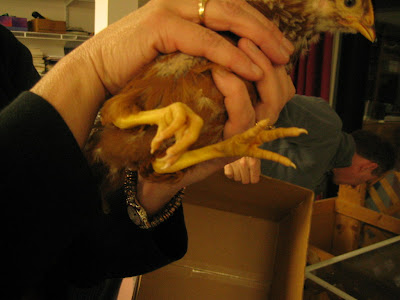 The chickens went home today. After two months of moving from one box to another... 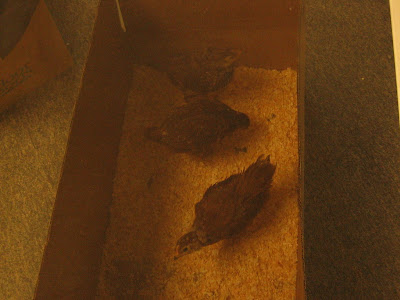 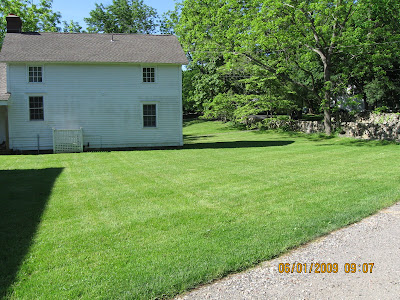 No more converted warehouse loft for them. 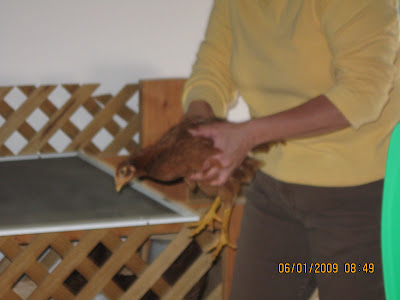 Now they're in a full-scale commune. 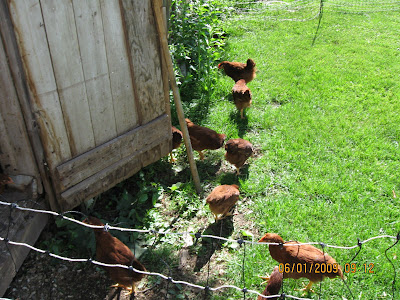 They - well, I guess "enjoyed" is the right word - a ride along some back roads... 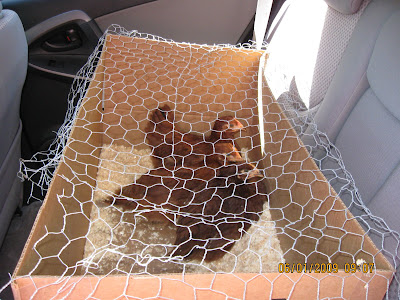 ... and settled in among their sisters who were fostered elsewhere. 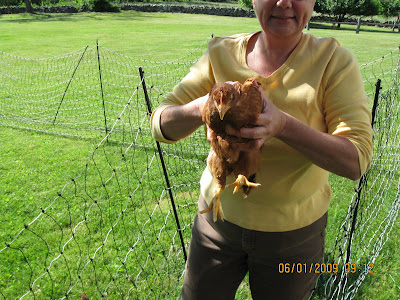 There's already some jockeying for queen of the chicken yard... 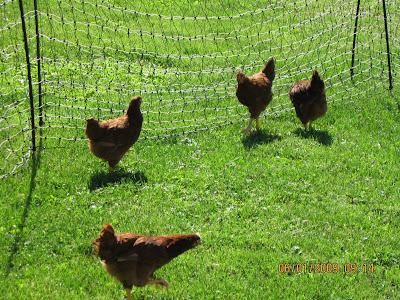 ... but mostly they're excited about being outside. (Grass! Bugs! What fun!) 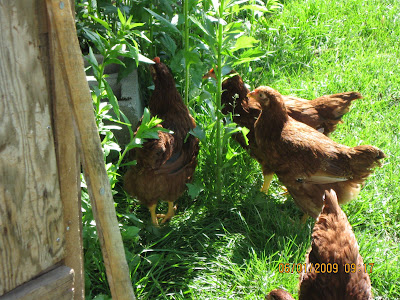 Sometime soon they'll move to the chicken tractor, whose resemblance to a gypsy caravan is not an accident. 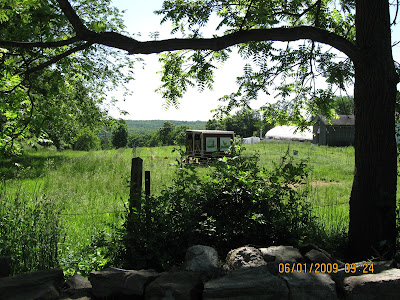 In this case, they'll move a few feet every day, so they can eat bugs and fertilize the fields. 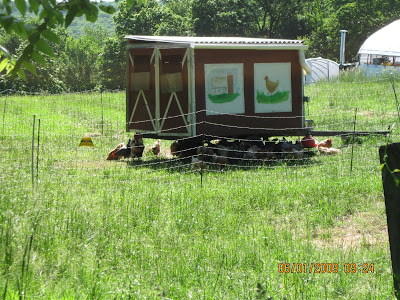 And, of course, they'll start laying in October or so. No doubt we'll pick up their output at the farm stand from time to time. 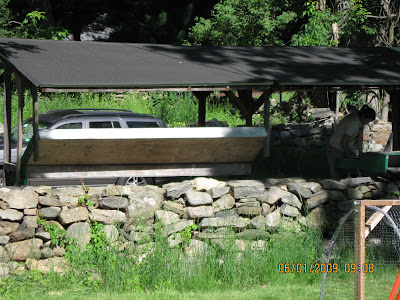 Goodbye to Peck, Pack, and Stripe!
Posted by Sarah Rettger at 10:04 AM 3 comments: