This week's poem is a big thank you to all the people who think about race in writing, put themselves out there, and push me to challenge my privilege. Y'all are awesome, and don't get nearly enough credit.

Rather than subject you to my totally non-poetic attempt at translation, I'll let YouTube come to the rescue: here's the poem read in English (albeit ninety degrees from vertical).

In which I rant a bit 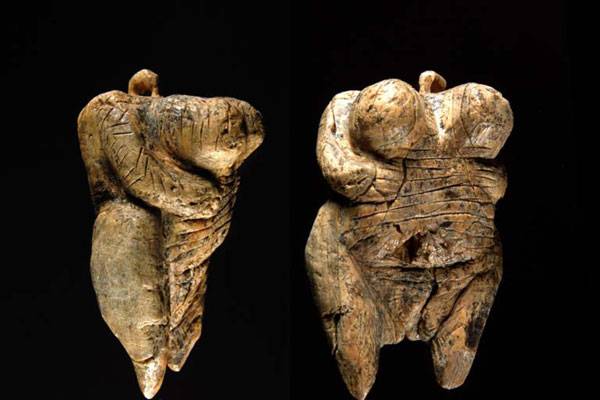 "One British scholar who studied the Venuses in his youth never noticed any clothing because, he recalled, he 'never got past the breasts.'"

You know how women sometimes complain about men speaking to their breasts rather than their faces? That's nothing compared to what the prehistoric European figurines (most of them called Venus of Something) have put up with.

It's something I've been especially cognizant of since reading The Invisible Sex by J.M. Adovasio, Olga Soffer, and Jake Page. And it's why this Reuters article, filed under "Oddly Enough," set me off, starting with the title.

"Sexy Venus"? This is not a prehistoric pinup girl. (Which, I found out only after typing that, is exactly the term Nature uses, at least on its

website, to describe the figure. I thought Reuters might have been dumbing down, but it seems the blame lies elsewhere.)

The Nature letter and accompanying commentary discuss a recently discovered figurine that bears some resemblance to the known ones, like the Venus of Willendorf, Venus of Brassempouy, and Venus of Lespugue, but is 5,000 years older than any known figurine of this type.

So it's huge - these figurines are thought to represent, among other things, the concept of gender as distinct from sex, which was a big step in the development of human consciousness.

As in, it happened earlier than we thought.

Those of us who bother with thought, at least, and don't get stuck on the idea of what The Invisible Sex calls "paleoporn." Adovasio and Soffer took their eyes off the breasts for a while and focused on what appear to be braids. And they found that "a close inspection of the braids of the Venus of Willendorf showed that her 'hair' was, on the contrary, a woven hat, a radially hand-woven item of apparel that was probably begun from a knotted center in the manner of certain coiled baskets made today by Hopi, Apache, and other American Indian tribes."

Which is significant, because based on the amount of detail in the hat, "the carver had to have spent more time on just the hat than on the rest of the entire figurine." Seems like the important part, no?

That's not to say there's no sexual aspect: "There is simply no denying that the sculptors of these figurines went to a great deal of trouble to show off the sexual and secondary sexual features of the female human, even to the point of leaving the rest of the figure - face, feet, arms, and so forth - either abstract or absent altogether."

But they - and there's plenty of speculation about the identities of the carvers - don't seem to have put the figures in the plain brown wrapper that Reuters, Nature, and the latest researchers are reaching for.

(All quotes from the ARC version of The Invisible Sex, which is a plausible takedown of standard man-the-mighty-hunter versions of prehistory and other ways to interpret archaeological evidence. There's a reason the ARC still has a home on my shelves.)
Posted by Sarah Rettger at 9:20 PM 1 comment:

For today's installment of Poetry Friday (look at me, talking about it like it's something I do every week!), the poem I took this blog's title from: "Letter to Alex Comfort," by Welsh poet Dannie Abse.

That Greek one, then, is my hero who watched the bath water
Rise above his navel, and rushed out naked, 'I found it,
I found it' into the street in all his shining and forgot
That others would only stare at his genitals.
What laughter!

The full text of the poem, alas, doesn't seem to be online, although Human Genome includes another section on one of its pages:

But nothing rises. Neither spectres, nor oil, nor love.
And the old professor must think you mad, Alex, as you rehearse
poems in the laboratory like vows, and curse those clever scientists
who dissect away the wings and haggard heart from the dove.

In fact, I've never read the full poem. I discovered it on the first page of my copy of the Oxford Dictionary of Quotations ages ago.

The Alex Comfort of the title is, in fact, the one who wrote The Joy of Sex. It's either slightly inappropriate or rather apt as a source for the title of a YA-lit-focused blog.

Comfort was a doctor-poet like Abse, and one of his mentors - that courtesy of a really well-written profile the Guardian ran in 2003.

Visit Kelly Polark for the rest of Poetry Friday.
Posted by Sarah Rettger at 6:41 AM 2 comments:

Anthropology and The Chosen One

Because I try to avoid "after hoc therefore something else hoc" fallacies, I'm not going to tell you that The Chosen One is responsible for the bad dreams I had after I read it.

If this book were a Feministe post, it would come with "trigger warning" at the top. This is a disturbing story, but it's also one that grabs hold of you.

Kyra is thirteen, and she's about to be married off to her uncle, who already has far more wives than is good for him. But this is an isolated polygamist community, and Kyra's uncle is one of the more powerful men, so she doesn't get much say.

She tries to resist. And she gets some support at home, especially from her father. He's the one who stands to lose the most by Kyra's resistance, and Carol Lynch Williams does a great job showing his internal dilemma - how long can his daughter's interests come ahead of his own?

An Edible History of Humanity isn't the first book you'd link this to, not like The Rapture of Canaan or Lucy Peale, but give me a chance: One of the ideas Tom Standage touches on is the relationship between agriculture and hierarchical societies. The theory is that as people switched from hunting and gathering to agriculture, they became sedentary and acquired possessions that they wanted to hold onto, so they weren't as likely to get up and relocate when a new leader claimed power or new privileges - and eventually we got monarchies and dictatorships.

Think about that as you read Kyra's descriptions of how the community has changed, and think about why even her father can't do much to help.