I included a few of these writers' rooms in an Omnibus post a few months ago. It turns out the Guardian has turned this into a feature now, with even more writers included. A few favorites: 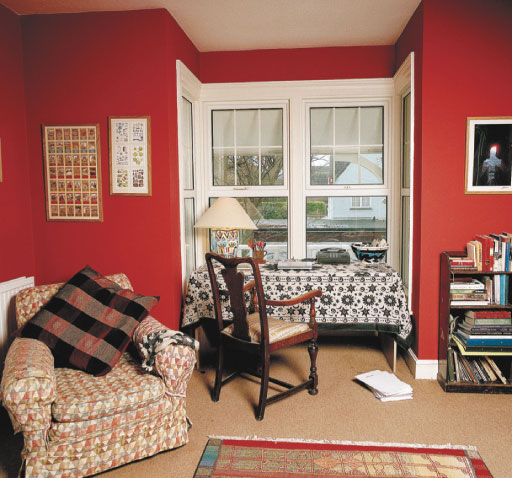 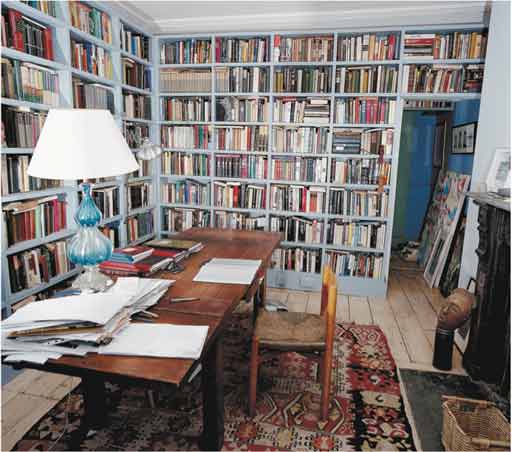 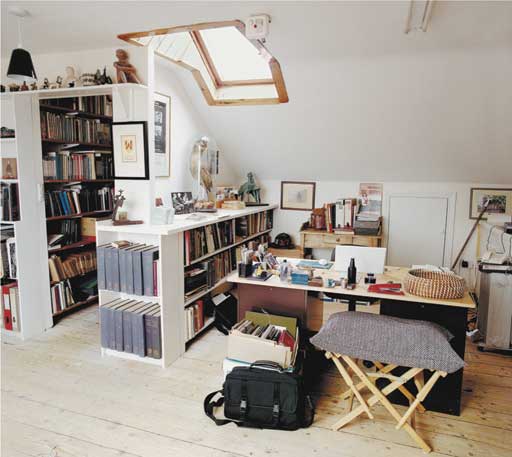 A.L. Kennedy (what is it with all the red walls?)

Looking at all these pictures, one thing is clear: I need to get myself a desk.
Posted by Sarah Rettger at 7:19 PM No comments:

In which she tries out a new reviewing format.

Suite Scarlett, by Maureen Johnson. May 2008.

First, I love the cover. I'm just a bit jealous of people who can wear lipstick like that - because, as Lola points out several times in the book, not everyone can wear bright lipcolor. Some of us still haven't found a color we can wear at all... but that's a rant for another day.

Meet the author: I discovered Maureen Johnson through her blog - go check it out.

What stuck with me: Besides the lipstick? I loved the portrayal of a real family business, where the kids are involved in the strategy and finances, not just the work. Oh, and the excitement of getting a text message from the love interest - I'm a long way from fifteen, but I still have that reaction.

Where the book is going next: I'll be recommending this when it comes out in May. In the meantime, my copy is going to a 30-something man. (Seriously. How many other reviewers can say that?) He's a theater person, and he's done his share of chaotic productions. He'll appreciate the silent-film-esque Hamlet rehearsing in a hotel basement.

Makes me want to read: Ghost Light, by Frank Rich. Some of Maureen's other books, like 13 Little Blue Envelopes and Girl at Sea.

Makes me want to reread: The Joys of Love, for a different take on theater life. Maybe The Pink Motel, just for contrast.
Posted by Sarah Rettger at 7:13 PM 1 comment:

I could see John Green or Jordan Sonnenblick having fun with this...

But since my current WIP is set in the 1880s, I'm throwing it out there for the amusement (and possible inspiration) of anyone who wants it.

My brother's friend, a non-Jew, is in a predominantly Jewish frat. A few weeks ago, the frat brothers decided to do something more creative than their usual partying: since Sean had (obviously) never been bar mitzvahed, his friends decided it was time for him to officially become a man - at the age of 19.

So they had not only an excuse to drink a lot, they also got to dump Sean out of a chair - from what I hear, the highlight of the evening.
Posted by Sarah Rettger at 6:00 PM No comments:

I have to admit that I didn't pick up this ARC the first time I saw it. I read the book description, and thought it looked moderately interesting, but because I was taking so many others home with me (that, by the way, is the real reason I'm always ready to clean up the ARCs in the back room), I figured I'd leave it for someone else to take a look at.

And then I saw the title pop up on one of my favorite bloggers' lists of anticipated reads. And I brought it home, figuring it would be a quick read. Quick, yes, but mostly because I couldn't put it down.

Lorenza, called Flora, is the younger daughter of the Pazzi, one of the lesser noble families in Medici-controlled 15th-century Florence. She's largely ignored by her status-conscious parents, who want to secure their position by marrying the beautiful daughter, Domenica, to Giuliano de Medici.

And when that fails, they launch the Pazzi conspiracy, an assassination attempt against Giuliano and his brother Lorenzo. Flora, naturally, ends up in the middle of the action, although she's not part of her family's conspiracy.

She's accompanied by Emilio, a poor boy from the country who moves from junior guardsman to confidante to something more. After the attack, Emilio goes in search of the army that was expected to support the coup d'etat, while Flora goes to defend the Pazzi compound.

What Flora does for the Medici brothers is enough to make the Medici guards deliberately overlook her as they round up everyone associated with the Pazzi family. She remains free to watch her father drawn and quartered (I wonder if Beaufrand has been able to get that image out of her head after describing it so vividly), her brothers' bodies displayed to the public, and people with only tenuous connections to the Pazzi punished for her family's crime.

The book's title comes from Botticelli's painting by the same name, which makes an appearance in the final pages. Botticelli is a minor figure early in the book - he visits the Pazzi house to paint Domenica's portrait, and has time to make conversation with Flora.

Thanks to Primavera, I think it's time to reread The Birth of Venus. It's set about fifteen years later, with many of the same historical figures. Posted by Sarah Rettger at 9:42 AM No comments:

... is up at Wizards Wireless. Nothing from me this month, but some thoughts on awards from many fabulous kidlit bloggers.
Posted by Sarah Rettger at 9:41 AM 1 comment:

Taking a page from (not to say blatantly copying) Colleen and a host of other bloggers today, I'm listing my most anticipated books of 2008 (so far). Besides the ones I've committed to for the TBR Challenge, I want to read 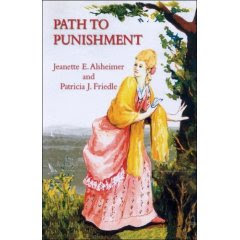 Path to Punishment, by Jeanette Alsheimer and Patricia Friedle

Defying Dixie: The Radical Roots of Civil Rights, 1919-1950, by Glenda Elizabeth Gilmore (thanks to last week's review in the Post)

The Girl With No Shadow, by Joanne Harris (that's right, a follow-up to Chocolat) 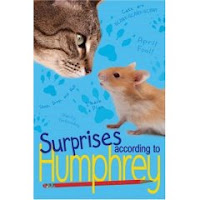 Surprises According to Humphrey, by Betty G. Birney

My Most Excellent Year: A Novel of Love, Mary Poppins, and Fenway Park, by Steve Kluger 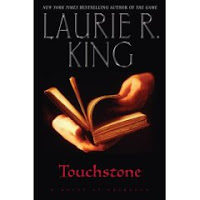 Ten Cents a Dance, by Christine Fletcher (that one might call for a reread of Last Dance on Holladay Street)

Wish You Were Here, by Catherine Clark (thanks to Little Willow's review)

Tell Me, Pretty Maiden, by Rhys Bowen (I should probably start at the beginning of the series, but I've recently become a Rhys fan through her posts on The Lady Killers)

And I'm going to borrow from Sarah Miller (there's that blatant copying again) and mention a few upcoming releases that I've already read and loved:

Trouble, by Gary D. Schmidt. Read it. It's amazing.

Lock and Key, by Sarah Dessen

The Penderwicks on Gardam Street, by Jeanne Birdsall

An Incomplete Revenge, by Jacqueline Winspear. After reading (and rereading, and rereading) Maisie Dobbs, I am amazed by how little I learned about World War I.

The Joys of Love. Yes, a new Madeleine L'Engle.
Posted by Sarah Rettger at 6:20 PM 1 comment:

Email ThisBlogThis!Share to TwitterShare to FacebookShare to Pinterest
Labels: TBR

Right, I was supposed to title this before posting...

It's been two weeks since my last post at Omnibus (What can I say? Real work got in the way of work blogging.) and ages since I intended to post here, so here's a list of everything I haven't had a chance to link to:

Critical Mass has a brief interview with Geraldine Brooks, whose People of the Book is hanging out on my TBR list. Stories like hers, or Anne Garrells' Naked in Baghdad, reinforce how amazing it would be to work as a foreign correspondent, and how miserably I would fail in the position.

The Cybils finalist lists are up (try saying that five times fast).

Laurie R. King spent last week on a virtual tour, celebrating the release of Touchstone (also on the TBR list...). Links to the various sites are at Mutterings.

Six to eight weeks, they say. I'll be watching for updates. What's pathetic is I wrote a paper on the General Re-AIG case a year ago, and I'm not sure I could explain it now.

The Brown Bookshelf is offering their predictions for Coretta Scott King awards. I just read Elijah of Buxton last week, and I'd love to see that win all sorts of things.

At educating alice, Monica has a list of her "Thoughts on Newbery" posts. Speaking of awards...

Since I can't even get reviews written for my own blog, I won't be volunteering for LibraryThing's early reviews. But thanks to their list of ARCs, I just found out that Vianne is coming back!

Sara Lewis Holmes posted a great Mary Oliver piece for the latest Poetry Friday. (Note to self: try, try, to plan ahead so you can actually do your own Poetry Friday posts.) Scroll down to the comments - they're worth it.

I'm not even close to the rewriting stage on my current WIP (I may just set it aside for a while, until I've figured out my main character again - which is pretty much what I've done for the past two months, except I pretended I was writing), but I'm linking to Justine Larbaslestier's post so I remember to reread it once I'm ready to rewrite.

Jen Robinson is currently answering questions at PBS Parents. One more thing to stay on top of!
Posted by Sarah Rettger at 7:18 PM No comments: