Chapter 7: How to Succeed in Romance without Really Trying

From this chapter, I think we can conclude that first dates in colonial times (or mid-twentieth-century depictions thereof) were no less awkward than their present-day counterparts.

Because William has come to call. And as that's about all he's done ("William seemed to feel that merely by coming he had done his share."), Kit's at a loss.

"When a young man came to call what did one talk about? Was it all up to the girl?"

Let me know when you figure that one out, Kit.

Rachel comes to the rescue, essentially giving Kit permission to end the tete-a-tete and join her cousins and John Holbrook, who are about to make popcorn.

"There was something irresistible about popcorn."

When the conversation once again turns to politics, William gets a rare chance to look good, and Kit takes notice:

"William Ashby was neither speechless nor dim-witted. He even dared to stand up to her uncle!"

But that doesn't mean she's starting to think well of him. Judith can't understand why Kit would hesitate.

"Don't you know William is able to build the finest house in Wethersfield if he wants to? Does he have to keep you amused as well?"

If it were me, and if I were going to be living in the house with him, I wouldn't think that a smattering of conversation now and then would be too much to ask.

"Without even asking, he was reckoning on her as deliberately as he calculated his growing pile of lumber."

But even though Kit's not thinking warm fuzzy thoughts about William Ashby, she does notice the contrast that he provides to her new daily routine, of which she is not a fan:

"It was incredible that every day should be the same, varied only in the work that filled every hour from sunrise to dark."

Speare-as-narrator gives us a look into Kit's thoughts here, in a way that doesn't exactly present Kit in a good light.

"Her hands were unskillful not so much from inability as from the rebellion that stiffened her fingers. She was Katherine Tyler. She had not been reared to do the work of slaves."

I find the word choice interesting here -- "reared" instead of the more familiar "she had not been born to..." I wonder if that was a deliberate choice.

Also, we've returned once again to Kit's thoughts on slavery: She doesn't question the institution, or her relationship to it. She only objects to the idea that she's being asked to do the same work as the slaves her grandfather used to own.
Posted by Sarah Rettger at 10:21 AM No comments:

That new-post-every-Wednesday thing? Yeah, sorry about that.

To return to the story: This chapter picks up not long after Kit's first church service, continuing our acquaintance with some of the characters introduced there. For instance:

"Reverend Gershom Bulkeley laid down his linen napkin, pushed back his heavy chair from the table, and expanded his straining waistcoat in a satisfied sigh."

Dunno about you, but I get the sense that he's not intended to be a sympathetic character. Especially not when the narrator goes into the list of all the preparations the family's been putting in for the past four days:

"Every inch of the great kitchen had been turned inside out. The floor had been fresh-sanded, the hearthstone polished, the pewter scoured. The brick oven had been heated for two nights in a row, and the whole family had gone without sugar since Sunday to make sure that the minister's notorious sweet tooth would be satisfied."

And then there's this:

"But the greatest part of his condescension he bestowed on Kit, once he had understood that her grandfather had been Sir Francis Tyler."

Speare's doing some signaling here, don't you think? People who appreciate Kit for herself = good. People who see her as a symbol of something = not to be trusted.

We also get a taste of colonial politics here, with Matthew and Bulkeley going at it. Matthew maintains that Kit's loyalty to the Crown "is in no danger in this house," but he also makes his own viewpoint clear:

"There are worse things than revolution!"

(Raise your hand if you get a whiff of Thomas Jefferson there, with his "I like a little rebellion now and then." Everyone with a hand up, your history geek status has been confirmed.)

And in the romance department, we have this development:

"Young William Ashby asked permission today to pay his respects to my niece."

Kit can't imagine why a guy who looked at her for two minutes on Sunday seems to be making a move already. Meanwhile, Judith is just as quick to deny that there was ever anything going on at her end:

"William never asked to call on me. I just said he was getting around to it."

Grain of salt, anyone?
Posted by Sarah Rettger at 1:24 PM No comments: 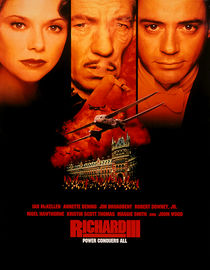 The Ian McKellan production of Richard III is beautiful. (Well, beautiful aside from the scenes of gratuitous violence, but when you're talking about the Wars of the Roses, that's kind of hard to escape.)

What I love about it is that it takes a story written about a specific period of history and, without explanation or even acknowledgement, drops it seamlessly into the 1930s. And it works. For me, it works because:

So go, watch it. (Fair warning: I picked this out because I needed a break from Downton Abbey overload -- and then realized that both Maggie Smith and Jim Carter are in it. If you find yourself wondering why Bates is plotting against the king, don't blame me.)

But here's my question: Is there any way this kind of time-shifting could work in a book?

There's a long tradition of moving Shakespeare's works to other eras, even in books. There is no shortage of Romeo and Juliet retellings, or Hamlet-set-in-high-school. And biblical retellings can work in the present day -- Queen of Secrets is one that comes to mind.

But none of those are tied to specific parts of history the way Richard III is. Would it be possible to write the book equivalent of this production, just plopping historical characters down in a different era? Or would it get too caught up in logic, the need to explain away the monarchy's impotence in the 1930s and the simple fact that this wasn't the way it happened?

I haven't been able to think of an example that shows this kind of time-shifting can work in prose, but I'd love to be proven wrong.

Posted by Sarah Rettger at 10:43 AM No comments: 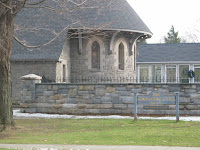 We've had some intimations that religion is going to be a point of conflict -- Kit and John Holbrook sort of danced around the edges of having an argument, but it's in this chapter, on a "crystal Sabbath morning," that the Puritan issue comes to the front.

Problem #1: Kit doesn't plan to go to church. She has basically grown up as a cultural Anglican, and doesn't get the Puritan mentality. Matthew doesn't give her any leeway on this. She joins the family at church. Which leads to...

Problem #2: Kit's clothes. Which, as we've already established, are far from plain.

"Beside the plain blue homespun and white linen which modestly clothed Aunt Rachel and Judith, Kit's flowered silk gave her the look of some vivid tropical bird lighted by mistake on some strange shore."

She wins this argument, but only because practicality gets in the way of Matthew's principles: there's simply nothing else for her to wear. Kit decides to hold her head high and wear something she knows she looks good in, and Rachel declares that the whole family is proud to be seen with her. Kit doesn't try to fool herself, though: "Judith was certainly not proud of her."

Problem #3: Kit figures that at least she'll get to see the town of Wethersfield now. Clearly they've been hiding the metropolis somewhere. But she steps in it again when she looks at the small wood frame buildings and asks how much farther they have to walk.

"'This is the town,' said Judith stiffly."

Kit is embarrassed, but that doesn't stop her from being underwhelmed.

"There was not a single stone building or shop in sight. The Meeting House stood in the center of the clearing, a square unpainted wooden structure, topped by a small turret."

Problem #3.5: And then we get to see just how sheltered her Barbados upbringing has been:

"Kit recoiled at the objects that stood between her and the Meeting House; a pillory, a whipping post and stocks."

I really doubt Bridgetown lacked its own set. The seventeenth-century penchant for corporal punishment wasn't just a Puritan thing. But Kit, no doubt, was tucked away in her grandfather's house, shielded from unpleasantness like that.

"By the time the long psalm was over Kit was glad to sit down, but presently she longed to stand again."

However, this gives Kit a chance to observe her new neighbors. (Of course, Speare never exactly explains how she does this, particularly when it comes to describing the people sitting in the rows behind her, without turning around and drawing attention to herself. Perhaps our third-person narrator is taking a step toward the omniscient, just for a bit.)

"Not all of them shared her uncle's opinions of seemly garb; some were as fashionably dressed as Kit herself. But the majority were soberly and poorly clad, and here and there, in the farthermost pews, Kit glimpsed the familiar black faces that must be slaves."

Again, slavery makes an appearance in the story, and Kit is not in the least troubled by it. And we're going to see more of it.

Even after she gets tired of people-watching, though, she's not giving up.

"Nevertheless, if this were a test of endurance, then she could see it through as well as these New Englanders."

Problem #5: After the service is over, Kit has to actually meet these people.

"A little distance away she glimpsed Goodwife Cruff, surrounded by a close huddle of whispering women, all darting venomous glances in Kit's direction."

She sees John Holbrook again, but is disappointed to see that he's gone totally teacher's pet. Then she meets William Ashby and his mother, and things start looking up.

"Mistress Ashby's dove-colored damask with its gilt-edged lace must have come straight from England."

Which is another descriptor we're going to see a lot of. However, he's rich, single, and available, so naturally he's the subject of romantic speculation.

"'Have you set your cap for him?' Judith asked bluntly."
...
"Kit colored to the edge of her bonnet. She would never get used to Judith's outspokenness."

Gee, where do you think this bit is headed?

(Post pic: Ridgefield's First Congregational Church. Trust me, it looked like the classic New England white box with steeple until they decided to renovate in the 1880s. Then they went "Italian rustic," or some such thing.)
Posted by Sarah Rettger at 9:02 PM No comments: