"...you will allow to be impossible, when you understand my affections have long been engaged elsewhere" 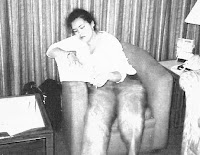 Just admitting that I have to put blogging on hold for a few weeks. I have a grad school personal statement to write, and even though (or perhaps especially because) I'm not making much progress on it, I shouldn't spend that writing time on a blog post.

But I have loads of Cybils books to write about, along with the next few Trixie Beldens - not to mention thoughts on bookselling and politics and whatever else comes to mind - so be patient, por favor, and I'll be back soon.

(Post pic is me studying AP U.S. History back in high school, since I haven't been photographed hunting the elusive personal statement.)
Posted by Sarah Rettger at 2:14 PM 1 comment:

The seventh Trixie Belden book, The Mysterious Code, was published in 1961. That means we have to take a little legal-framework field trip back to the days before Tinker v. Des Moines.

Tinker, decided by the Supreme Court in 1969, holds a pretty secure place in lists of significant Supreme Court decisions. It's got some great pull quotes, like

"In our system, state-operated schools may not be enclaves of totalitarianism. School officials do not possess absolute authority over their students. Students in school as well as out of school are "persons" under our Constitution. They are possessed of fundamental rights which the State must respect, just as they themselves must respect their obligations to the State."

Tinker deals specifically with the free expression clause of the First Amendment, not the freedom of assembly clause, but I'd argue that wearing a Bob-Whites of the Glen jacket would be protected in the same way that wearing an armband is.

(Quick summary of Tinker: Three students decided to wear black armbands to school as a form of protesting the Vietnam War. The school announced that anyone wearing armbands would be suspended. The students wore their armbands, were suspended, and appealed their case. The Supreme Court found for the students and remanded the case. My introduction to Tinker was through The Rights of Students, a book published by the ACLU that totally made me want to take a case of my own to the Supreme Court.)

"The school board is having a meeting tonight -"

"And they may very well tell us that we can't ever be a club again!"

Mr. Stratton, the principal, explains the logic like so:

"The board feels it must scrutinize closely the reason for any organization not sponsored directly by the school. It doesn't want secret societies to exist in Sleepyside schools, when clubs - really gangs - can be the cause of so much trouble."

I'm still not buying it - really, the school board can make decisions on a non-school-based activity? - but let's not quibble. The Bob-Whites are in trouble, and have to come up with a way to prove that their club has a valid purpose.

After a UNICEF info dump, it's resolved that the B.W.G.'s will hold an antique show fundraiser as a public display of altruism. Can't argue with Trixie's logic:

"Well, you know how it is here in the East," Trixie said, the words falling over one another in her eagerness to explain. "Everyone is interested in antiques."

Yes, welcome to the region that turned "antique" into an active participle, describing a weekend activity. Walk down Ridgefield's Main Street someday, and you'll see that she was not exaggerating. (Then stop by my store, where even people without farmhouses to furnish can find something.)

It doesn't take long for Trixie to assume that someone's going to have a nefarious interest in all the antiques gathered in one place. It's almost a refrain:

"We want to be careful not to mention how valuable some of the antiques are that we will show," Trixie said. "It might give people ideas about stealing them."

"Someone has read in the Sun about the jewel box and the antiques we have in the clubhouse. We'll have to guard them night and day."

"If we make a big fuss about the oak desk, a lot of other people may find out about the things in Mrs. Vanderpoel's house and break in... and they may break in the clubhouse."

Naturally, Trixie's proved right in the end, when thieves break into both the clubhouse and the warehouse. And even though they end up holding Trixie hostage, she outsmarts them.

And yet that's only one of the plot threads in this book, which manages to pack quite a bit into its pages. Trixie also gets attacked while bringing Bobby home from a neighbor's house, and later lost in a snowstorm and has to spend the night in an old schoolhouse (because, as Brian says in one of his less-endearing moments, "All right, Trixie, if you say you're going with us, you will. Some girls just never seem to know their place.")

And she loses a femininity battle with Moms, who complains, "I wish you weren't such a tomboy. You looked so pretty when you dressed up every day and pretended you were impressed with that cousin of Honey's" and then drags her daughter dress shopping.

Other points of interest:

Brian on Mart's use of big words:

"He probably doesn't know what the words mean himself. He reads the editorials in the New York Times and learns them by heart." Secretly Brian was proud of his younger brother.

And I not-so-secretly continue to love these two.

The phone number for the Sleepyside Sun is Sleepyside-9680. Not surprisingly, I've never had a phone number with letters in it. (But I loved seeing everyone on child_lit reminisce about theirs!)

Some nice wordplay and dry humor in this book:
This is not one of Diana Lynch's more favorable appearances. First we have this:

"He should know, too," Diana said, "how the B.W.G.'s gave my parents and me a whole new set of values. We're lots omore of a family since my mother and father discharged the butler, the nurses for my twin brothers and twin sisters, and half the maids. They thought when we firt moved into this neighborhood that we'd have to live like millionaires. I guess we couldn't do it because we've really been poor most of our lives."

And then right after getting excited about Mr. Belden's offer of a vacant warehouse to hold the show, Trixie tells Diana they can't accept an old oil burner from Mr. Lynch to heat the clubhouse, because it goes against the "doing everything ourselves" ethic. But borrowing a warehouse doesn't?

[Book source: My collection. Bought it ages ago.]
Posted by Sarah Rettger at 10:12 AM 3 comments: